To name some of its main highlights, Starlight for RabbitMQ is:

We detailed the “what” and “why” of this exciting API in our Starlight announcement. In this blog post, we’ll walk you through the thinking behind Starlight for RabbitMQ, and show you how you can easily migrate a RabbitMQ application to Apache Pulsar.

Under the hood of Starlight for RabbitMQ

Depending on the use case, Starlight for RabbitMQ can be deployed in a broker as a protocol handler or can be launched as a standalone java application.

AMQP 0.9.1 (the protocol RabbitMQ uses) employs the concepts of exchanges, queues, and bindings to provide basic routing capabilities inside the message broker. These concepts need to be mapped to Pulsar topics and features.

One important architectural decision is that Starlight for RabbitMQ doesn’t interact directly with the managed ledger like in other RabbitMQ integrations for Pulsar. Interacting with the ledger has the advantage of being performant, but the disadvantage is that the broker (which interacts with the ledger) must have ownership of the topic.

Since in AMQP 0.9.1, there is a many-to-many relationship between exchanges and queues, all exchanges and queues and related topics must be owned by the same broker. There are techniques to do this using topic bundles, but the result is that a full AMQP virtual host can be handled by only one broker at a time, which becomes an issue for scalability.

On the publish side, an AMQP exchange is mapped to a topic. Depending on the type of exchange, the publish routing key is also included in the topic name.

On the consumer side, Pulsar shared subscriptions are used to represent the AMQP bindings from an exchange to a queue. When creating an AMQP queue consumer, the proxy creates Pulsar consumers for all the bindings/subscriptions of the queue.

When you unbind the queue, the subscription isn’t deleted right away since the consumer can be lagging. Messages will still be received from the subscription and filtered if their position is past the end of the binding. Starlight for RabbitMQ periodically checks if all messages from the closed binding have been acknowledged. Once the messages have been acknowledged, Starlight for RabbitMQ deletes the corresponding subscription. 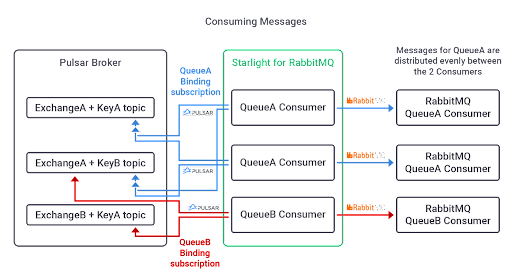 Pulsar shared subscriptions are used to represent bindings. This is because they enable the use of individual acknowledgments, which is a key feature that both RabbitMQ and Pulsar have in common to support message queue use cases.

Starlight for RabbitMQ supports connections using TLS/mTLS to ensure privacy and security of the communication. It also supports the PLAIN and EXTERNAL mechanisms used by RabbitMQ. Internally, it will use the same AuthenticationService as Pulsar and map these mechanisms to existing Pulsar authentication modes.

The PLAIN mechanism is mapped to the AuthenticationProviderToken mode of authentication. The username is ignored and the password is used as the JSON Web Token (JWT).

The EXTERNAL mechanism is mapped to the AuthenticationProviderTls mode of authentication. This is the equivalent of the rabbitmq-auth-mechanism-ssl plugin.

Starlight for RabbitMQ can connect to brokers that have TLS and/or authentication, and/or authorization enabled. To perform its operations, Starlight for RabbitMQ proxy currently needs to use an “admin role”. Future versions will relay the principal authenticated to the proxy and use a “proxy role” so operations on the broker will have permissions from the originating application.

At the moment there’s no authorization built in the proxy, but this is on the roadmap.

Multiple proxies can be launched at the same time for scalability and high availability needs. The proxies are stateless and can be started and stopped at will. They share their configuration in Zookeeper so you can create/delete/bind/unbind exchanges and queues on any proxy, and it will be replicated on the other proxies.

Publishing messages can be done on any proxy. On the receiving side, messages will be dispatched evenly to all connected AMQP consumers since the Pulsar subscriptions are shared. 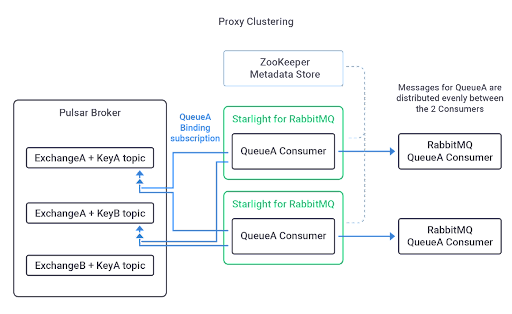 Note that the current version of Starlight for RabbitMQ only supports authentication as a security mechanism. Future versions will implement authorization with access controls on the vhosts/exchanges/queues on one side. On the other side, it’ll relay the original principal to also implement this on the Pulsar topics.

Start streaming with Starlight for RabbitMQ

Follow DataStax on Medium to keep up with our latest announcements and developer resources on all things Apache, Cassandra, streaming and more. To join our growing developer community, follow DataStaxDevs on Twitter.