Migrating from SQL to NoSQL with Spring PetClinic and Apache Cassandra 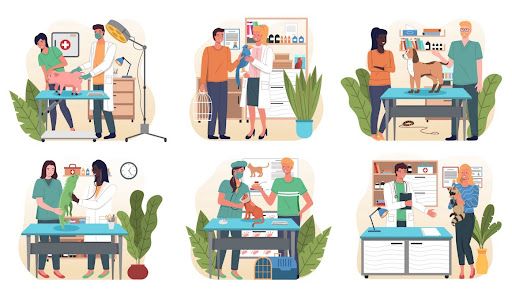 Welcome to the final post in a six-part series on Apache Cassandra®. In our previous post, we discussed three key migration approaches to bring your existing SQL applications over to NoSQL. Now, we’ll look at implementing these data models with a Spring PetClinic app.

Part 3: Benchmark Your Database with NoSQLBench

As a quick reminder, the three approaches we looked at in Part 5 are the following:

One thing all three approaches have in common is that you always need to migrate your data models. In this post, we walk you through how you can do this in a series of examples based on a Spring PetClinic application. At the end, you’ll get a chance to try it yourself by following this YouTube tutorial and using the free resources on our DataStaxDevs GitHub.

Spring PetClinic is an open-source sample application to show how you can use the Spring framework technical stack to build simple and powerful stateful applications. Originally made for relational databases, that application is now usable on distributed systems like Cassandra, thanks to DataStax’s Director of Developer Relations, Cédrick Lunven.

But more than just importing or changing drivers from one database to another, migration is about completely transforming a SQL database to a NoSQL one.

In this hands-on workshop, you’ll spin up a fully-realized Cassandra database through DataStax Astra DB, a multi-cloud database-as-a-service built on Cassandra. You can build and deploy cloud-native NoSQL applications in a matter of minutes on Astra DB, without having to worry about tuning and configuring Cassandra.

Astra DB is free-of-charge up to 80GB storage and 20 million monthly operations; no credit card required. Astra DB is also completely serverless, allowing you to run Cassandra clusters only when needed and lowering your costs significantly.

Data structure on SQL vs. NoSQL

If you come from the relational SQL world, you’re familiar with database normalization — the process of structuring a relational database according to a series of “normal forms” to increase data integrity and reduce data redundancy.

Relational databases were created at a time when disk platters were huge for a couple of megabytes of data, making them expensive and slow. Reducing data redundancy was key in creating data models, as disks didn’t have enough space to store repetitive data and adding space was expensive. Figure 1 illustrates a typical data model on SQL. 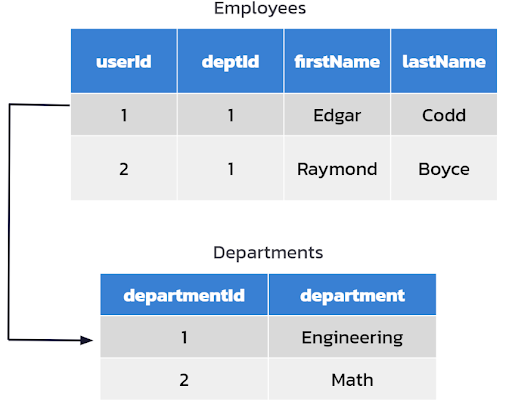 For example, if you have a set of employees and you want to find out what department an individual employee is in, you have a single row for each department without any repeats. There’s only a single instance for the Engineering department, or the Math department, and you can easily find the department Edgar is in. 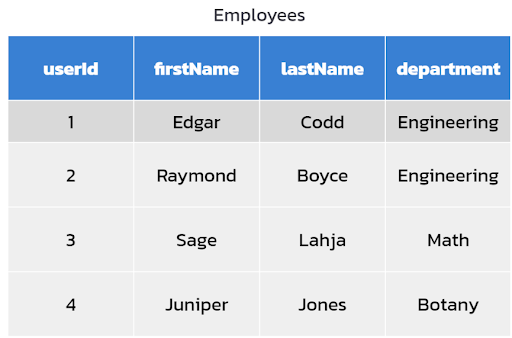 Following the previous example, on NoSQL databases, data is stored into a single structure. In Figure 2, the department data is now added into the data structure of the employees table, creating repetitive data (Edgar Codd and Raymond Boyce are both in Engineering).

A big advantage of denormalization is speed at read. Many NoSQL databases, including Cassandra, are optimized to be fast and scalable for reads. But there are also some cons. During denormalization, writes multiply and you have to manually make sure that the data is reliable and accurate over its entire lifecycle.

Data modeling on SQL vs NoSQL 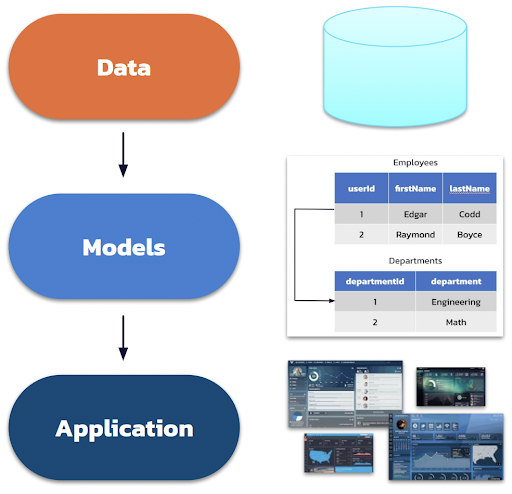 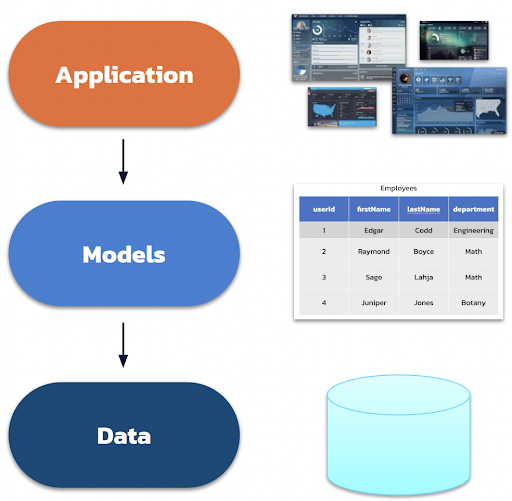 How to create a NoSQL data model

When migrating your SQL data model to NoSQL, you’ll need to follow the data modeling workflow in Figure 5 shown below.

Now, let’s migrate the data model from SQL to Cassandra with an example PetClinic Java Database Connectivity (JDBC) that’s running a MySQL database locally. Watch the YouTube tutorial to follow along in real time, and you can even see a live demo by SpringPetClinic on GitHub.

You’ll first need to add a set of information (e.g. name, address, phone number) for owners and their pets to your Spring PetClinic application. Next, think about the application workflow. For this workshop, we came up with three.

Figure 8 illustrates the owner schema from the SQL implementation with a set of owner properties and an ID that uniquely represents that owner. This is translated over to our Cassandra table on the right. It’s pretty straightforward since there’s only one read.

Next, we have the following:

Let’s say you want to see both owner and pet information. In SQL, you have two tables because there’s a one-to-many relationship. An owner can have multiple pets, but a pet can only have one owner. In Cassandra, you can combine the two into one table and add a clustering column with the pet ID. For each owner, you can now have multiple rows to store data in a single read, called a multi-row partition. 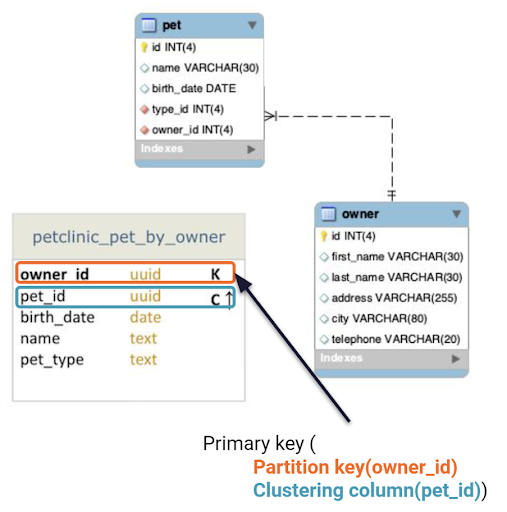 Watch this SQL to NoSQL explainer video for an alternative approach to flatten out the data even more by making the owner fields static. This approach is particularly useful for larger applications with high volumes of data.

Lastly, we have our third scenario:

Use-case 3: A user opens up the owner detail page.

There’s a nested relationship among pets, owners, and visits. Again, you can turn this into a multi-row partition by using a clustering column for visit ID, meaning that you can see any number of visits per pet in a single read.

Alternatively, you can denormalize all the separate tables into one table or store all four of the SQL tables as a JSON document on a document database, such as Cassandra, Astra DB, and Stargate. Follow this SQL to NoSQL video tutorial for a full explanation.

Figure 11 represents the original diagram from SQL and the flattened, denormalized version of it on Cassandra. Cassandra handles the many-to-many relationship between specialties and vets on SQL by using a collection type, which is a way to group and store data together in a table column. For a particular vet, you can now store and retrieve a set of specialties in a single read and vice versa.

Now it’s your turn to execute the whole process from scratch with instructions in this video tutorial and resources on GitHub. Here’s what you’ll do:

Congratulations! You’ve gone through a high-level and detailed process of migrating your SQL database applications to NoSQL, specifically Cassandra databases.

To keep learning, try out these other Cassandra tutorials on GitHub on moving from relational to distributed databases, and read our post on migration best practices for Apache Cassandra. If you like working with Spring PetClinic applications, check out our tutorial on building a reactive implementation of Spring PetClinic in Cassandra.

We also frequently hold free on-demand webinars and release weekly workshops on our YouTube channel for developers. You can also find a comprehensive collection of Cassandra courses on DataStax Academy, from creating multi-row partition tables to using secondary indexes.

If you have more technical or in-depth questions on Cassandra, feel free to ask the experts on the DataStax Community or chat with us on our Discord channel.